Every time I take a weekend excursion, I feel like I am in full-flung travel mode again. Flashback to my 28 months on the road. It’s just me and my backpack, and I’m free to go anywhere.

With my job as English teacher in rural Japan, I can have this sensation every weekend, if I want.

But what made this trip unique was its purpose: I was traveling to Tokyo for one of my students. My student Yuta* had miraculously made it to the finals of the 67th All Japan Inter-Middle School English Oratorical Contest.

Our journey began when I arrived at my new workplace in early August. On my desk was a speech, which Yuta had written in Japanese and the previous ALT had translated into English. However, my supervisor suggested that we give it an overhaul. My supervisor, a creative and spontaneous English teacher, has a knack for speeches. In his 20 years of teaching he has brought 9 students to the finals in Tokyo. So the two of us – me, as a creative writing major, and he as an experienced teacher – made a great team for helping Yuta reach his potential.

Yuta has been going to private English lessons after school for many years. Unlike most students, he looks you in the eye when he’s talking to you. Even though he’s a little small for his age, his loud voice and strong opinions often make him the center of attention. I’ve seen him in his classes; he’s not your typical shy Japanese kid.

Yuta and I started practicing after school, for an hour or more. At the beginning, it was mostly talking about his ideas, and trying to find the right words to express them. Google translate helped a lot. After about 10 revisions, we had settled on the final draft. He must have learned dozens of new words in the process.

Soon, it was time for the local contest. About 60 students from local junior high schools gathered at a community center to give their 5 minute speeches to a room filled with at least a hundred teachers, parents, and fellow students. For most of the day, I practiced with Yuta outside. When it was his turn, he spoke in a big, passionate voice. Unlike the previous speaker, who forgot her speech half-way through, Yuta’s natural confidence and enthusiastic personality made him truly shine. I couldn’t help but cry as I watched him. I felt so proud to know him.

He won second place in the local contest that day, and the top three students were invited to the national competition in Tokyo! The first place winner from our local bracket was a Brazilian girl who spoke about her multifaceted relationship with her mother.

Soon it was time to prepare for Tokyo. Yuta asked me if I wanted to practice three times a day: before school, after lunch, and after school. I felt honored that a student wanted to spend so much time with me. At our practices, I always asked him, ‘What do you want to do today?’ This simple question is an example of something I learned while working at the SBCC Writing Center. Letting a student direct the interaction makes them feel more connected with the lesson.  Yuta seemed to appreciate the power to decide what to do.

He would usually ask for help with his pronunciation. He used to say ‘muzzer’ instead of ‘mother,’ and any word with an L or R is often challenging for Japanese people. So we practiced words like ‘recently’ ‘learn’ and ‘school’ many, many times.

It was fun for me to experiment with different teaching methods. For example, when he said, ‘We are not afraid to say what we think,’ I told him to put equal weight on the ‘what we think’, clapping to illustrate the rhythm of the phrase.

Five Days in Tokyo: A Hiatus from Reality

I was the only ALT from Fukui to accompany a student to Tokyo, and only because I fought for it. I had a feeling that this might be a once-in-a-lifetime opportunity, so I told my supervisor I really, really wanted to go, and he listened. Sure, I had to take time off and pay my own way, but I still feel incredibly grateful.

The night before I was supposed to leave, I was so excited I couldn’t sleep. I met my JTE (Japanese Teacher of English) Mr. Yamada*  on the train. We opted for the fast train – called the shinkansen – which travels at an average of 170 miles per hour. We were in Tokyo in 3 hours. (It’s a 6 hour drive!)

Yuta and his family had driven to Tokyo the night before. Once we found them, we practiced in his hotel room for a bit, and parted ways. Yuta was in a hotel payed for by the speech contest – he got to share a room with other participants. I know he made a lot of new friends! I spent the night at a friend’s house to save money.

The next morning it was Yuta’s turn to give his speech at the semifinals. I took detailed notes about the other speakers and made predictions. As I watched them, I couldn’t help but think that he had a chance to move forward. As his turn approached, my stomach started doing somersaults. I think I was more nervous than he was! When it was his turn to speak, again I couldn’t help but cry. Tears rolled down my face as I watched him shine, confident and pure-hearted, unafraid.

And miraculously, he made it! Out of the 33 students from the Northern Japan Region, he was in the top 7, earning him a coveted spot in the finals the following day.

Held at a fancier location in a bigger auditorium, the atmosphere at the finals was thick with nerves. These were the most talented junior high school English speakers in Japan, all in one room!

I was astounded by the inspiring topics and impeccable delivery from these kids. They spoke about important real world issues, such as Japan’s relationship with Korea and the 70th anniversary of World War II.  Several shared  captivating anecdotes about overcoming bullying and bigotry. One of the finalists had a German father, and spoke about her dual identity as both Japanese and German.

Most of the participants were from private schools; only 8 students out of the 30 finalists were from public schools. (Yuta was one of them!) Many of them spoke with a British accent, and some truly sounded like native speakers.

During the breaks, I conversed with several of the contestants, and was impressed by how comfortable they were talking with me.

Unfortunately, Yuta didn’t make it in the top 7. And yes, I cried again when he gave his speech. I’m incredibly proud of him. After all, he was one of the best 30 speakers in all of Japan.

After the contest, I paid a ridiculous sum to attend the closing banquet, where I got to see a Japanese princess speak with a British accent, congratulate all the students and present the final award. The first-place speaker was a girl from Okinawa who urged listeners to turn off their smartphones and pay attention to the world.

When I was back at school, my supervisor asked me to do a write-up about my impressions about the speech contest. You can read my conclusions here:

What makes a great speech? After watching my student participate in the finals of the 67th All Japan Inter-Middle School English Oratorical Contest speech contest, I have drawn some conclusions. The speeches were judged based on three categories: Content, English and Delivery. Therefore, the winners must have an interesting topic, be easy to understand, and connect with the audience.

First and foremost, a great speech must have unique and captivating content. In the finals, no two speeches had the same topic, although some of them had overlapping themes. The winning speech was about how smartphones are changing society. The second place winner spoke about the importance of names. Yuta’s speech, titled ‘Children are our Teachers,’ was about learning from children. He urged listeners to retain childlike qualities like enthusiasm, bravery and innocence even as we grow up.

Secondly, every speech in the finals was easy to understand. The finalists all spoke clearly and I could comprehend every word of their speeches. Many of the speakers, such as the first place winner, sounded like native speakers. However, students with a noticeable accent – like Yuta– were still successful in conveying their message.

Lastly, the speakers in the finals all had the ability to connect with the audience because of their confidence and humor. Like Yuta’s speech, the top winners all made the audience laugh. A speaker must have a strong personality, and have the confidence to speak loudly on stage in front of hundreds of people.

All in all, I am extremely grateful for the experience of working with my students and fellow English teachers during this speech contest, especially Yuta. Both he and I learned a lot from each other. I hope that next year I can take another student from Midori* Junior High School to the finals in Tokyo!

*I changed the name of my student, the teacher I was working with, and my school to protect their privacy.

Unfortunately I can’t post pictures of my students on the blog. So here are some random photos from my trip. The speech contest was only one part of my 5 days in Tokyo. In addition, I visited a fish market, played ultimate frisbee, met up with a few old friends, and experienced Tokyo nightlife. Yay for adventures! 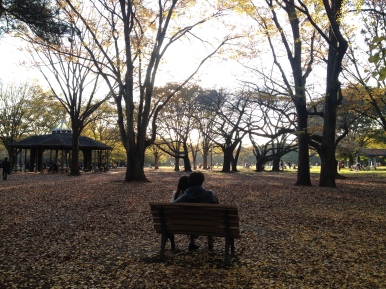 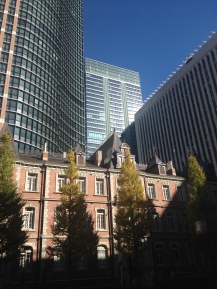 At a park in Tokyo I was reminded of Santa Cruz, California. There was a drum circle!

This is the Tokyo Station. It reminds me so much of the one in Melbourne! 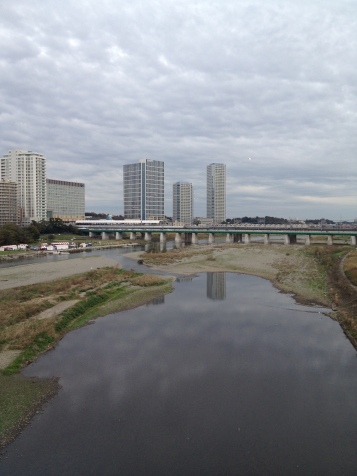 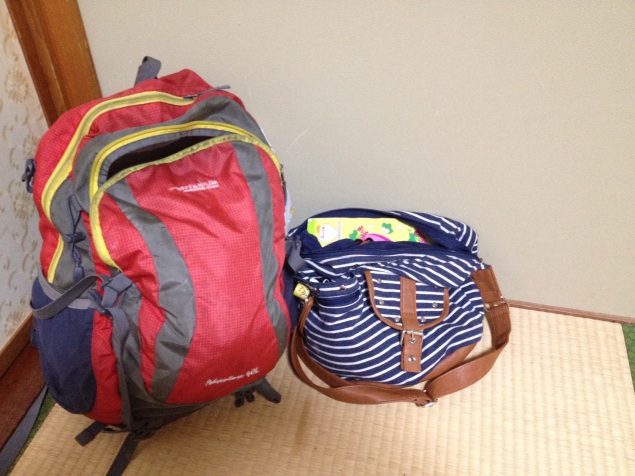 All my stuff for my 5 day trip. I’m getting pretty good at packing light.

This guy is from Bulgaria and he had some kind of cool Bulgarian violin.

It was a nice day too! 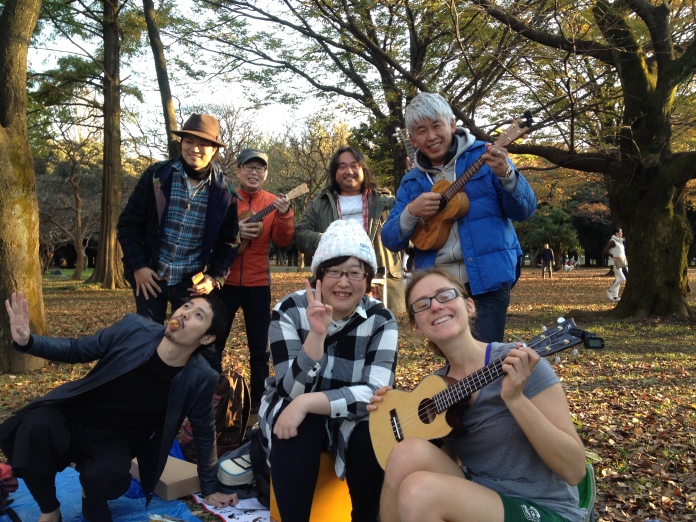 I even found a ukulele jam sessions! Of course I had to join in. 😛 I think they were pleasantly suprised by my request to join in. 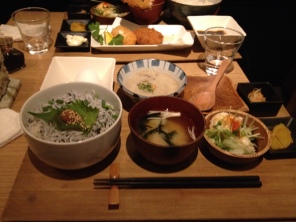 One of my meals in Tokyo. Miso soup, pickled veggies, and rice mixed with tiny fish called shirasu. You crack the egg in it and make a pudding-like mixture. 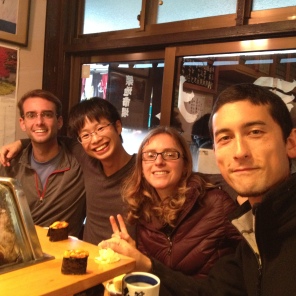 I decided to try to make friends at one of these cute bars in Tokyo. It was easy!