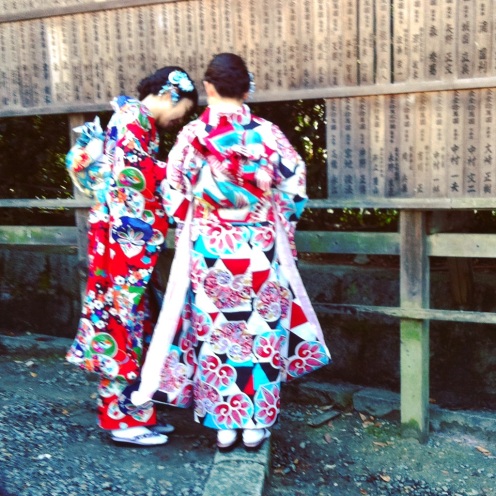 I took this slightly blurry on the sly of these girls

Light filters through the gates of Fushimi Inari
A few weeks ago, I was surprised by a message on my phone from a mysterious sender. It read, “Do you want to go to Kyoto with me?” It took me a few minutes to figure out who it was from, but once I did, I immediately replied, “Yes!”

Kaoru is a young Japanese teacher at my school who coaches volleyball and is one of the few teachers eager to practice her English with me. Sometimes we make small-talk in the teachers room when she can find a moment of peace in her hectic day.

When I asked why she is interested in English, she told me that she has an intuitive feeling that she wants to learn it. She studies once a week at an eikeiwa (conversation school.)

Then she asked me what is the best way to improve ones English, and I answered: “Make foreign friends, and spend time with them.”

So a few weeks later, she followed my advice, and asked me to spend the day with her.

It was raining but I decided to bike to the train station anyway.  I arrived slightly damp but excited, and we bought our tickets together at the office and got on the 8:30 train.

In a typical Japanese way, she had prepared an immaculately planned schedule. I appreciated her meticulousness, because when I travel, I am more of a drifter, seeing what I discover and who I meet, and making up my plan as I go. But she had done her research. Our plan was to hit up three popular destinations in one day: Kinkakuji, Fushimi Inari, and Byodo-in.

After our 2 hour train journey, we arrived at the bustling Kyoto Station and, after some trial and error, found  the correct ticket office, where we bought a one-day transportation ticket (1250 yen, or about $12) which allowed us to take most buses and trains around the city. So we hopped on a bus to our first destination. 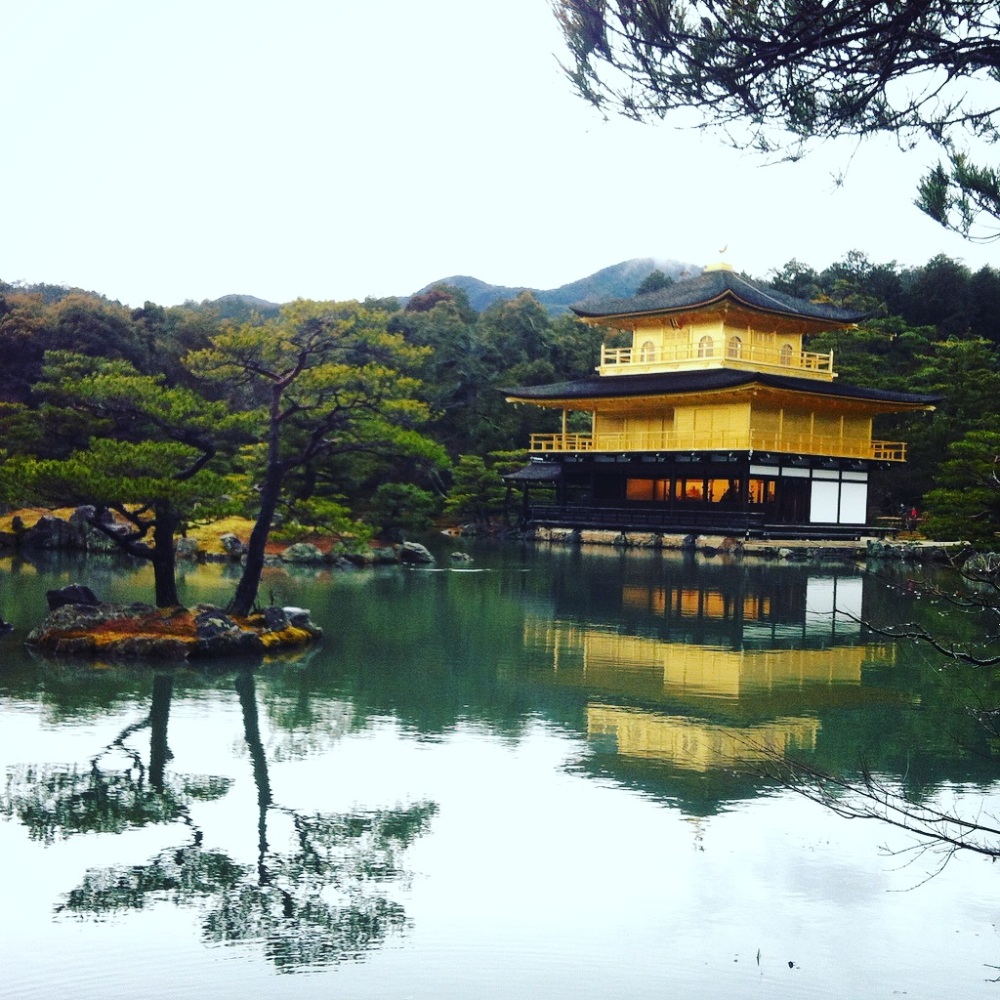 After a 30 minute bus ride eavesdropping on some French tourists (I could pick out a few words!) we got off at the famous Kinkakuji, (金閣寺、きんかくじ)* also known as the Golden Temple. It is one of the most popular tourist destinations in Kyoto because of its picturesque reflection in the pond. However it’s typically overrun with tourists.  (If you only have time for one temple, I’d reccommend Ginkakuji (the Silver Temple) because of its stunning gardens. Both places cost 600 yen to enter.

People could choose something to pray for and light a candle. I chose family.
Temples in Kyoto often have interactive activities, and at Kinkakuji you could buy a prayer candle with different themes (and funny typos.) You could select ones heart’s desire, a family in safety, be in safe and sound, or schoolwork accomplishment. I bought a family in safety candle for 50 yen and thought of my family in California as I lit it.

Kaoru picked a restaraunt for us nearby, and they miraculously had a vegetarian option! I ordered udon and tempura, and I felt well nourished for the rest of our busy day.

This is halfway up the mountain! 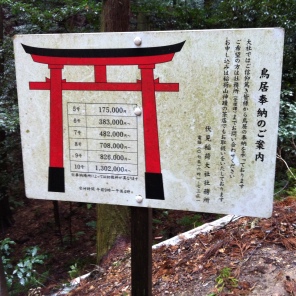 After lunch, we took a bus to our second destination: Fushimi Inari (稲荷, ふしみいなり)*.

I had been there once before, but it was during New Years, when thousands of Japanese go to celebrate. (Don’t go during New Years!)  This time it was less crowded, and I was excited to hike the whole mountain, which took about an hour and a half.

Inari is the Japanese God of rice popular in Shinto and Buddhist belief systems. A shrine at the bottom of the mountain was founded in 711 AD, which made me reflect on my own young and immature country. Inari is also a kind of sushi – rice wrapped with sweet fried tofu – and I learned that its traditionally considered the favorite food of foxes. Also, foxes are messengers for Inari. So on the mountain, there are many statues of foxes guiding the way as you ascend.

On the way down, I bought a treat called taiyaki. There is sweet bean paste inside this fish-shaped pancake. おいしいでした！(It was delicious!)

I was especially excited to visit Byodoin Temple because one of my students had recommended it to me. In fact, he always writes about it in his essays on tests, where students are required to write 5 perfect sentences (recently I asked him to challenge himself and write about something else!!) He always says the same thing: ‘Byodoin is a famous temple in Kyoto. You can feel the history of Kyoto there.’ He was right, though.

As soon as we walked through the gate, I was immediatly filled with an all-encompassing sense of calm. Sunlight filtered through the clouds, and the lake around the temple reflected it like a mirror.  I pulled a 10 yen coin out of my pocket, and compared the real view to the engraving on the coin.

We payed an extra 300 yen to enter the temple and admire the Buddha. Even though I couldn’t understand the explanation that was only in Japanese, I tried to ask a question about the hand-shape of the Buddha. The guide couldn’t speak English, but another Japanese tourist made an effort to answer my question.

They have a museum but don’t allow photography or drawing inside, or I would have documented its inspiring interior.  The museum has a large collection of statues and artifacts, and I would have stayed longer to admire them if time allowed! 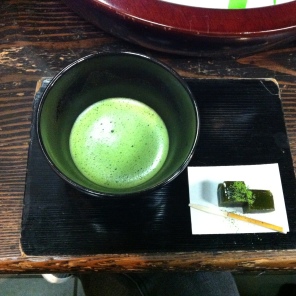 The neighborhood surrounding Byodoin is famous for green tea, so we stopped and had some overpriced but delicious maccha (600 yen). 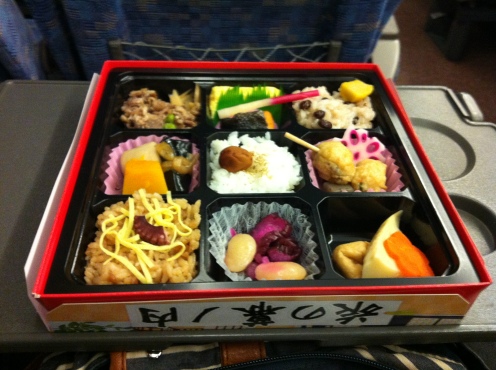 There was no vegetarian bento that I saw, but I gave the meat parts to Kaoru who gladly accepted. 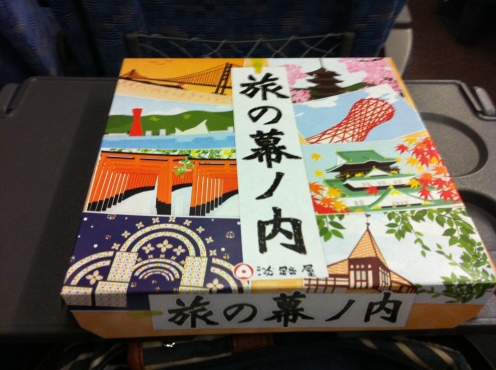 I thought this box was so gorgeous I wanted to save it!
Kyoto is a cultural mecca of Japan, and I feel so lucky that I live just 2 hours by train from here. It was my fourth time there, but every time I find more to explore and discover. The longer I live in Japan, instead of feeling like, ‘Oh, I’ve seen enough,’ I keep realizing there are more places that I want to visit.  It can be kind of an overwhelming feeling, since I know it’s impossible to see everything.

I was really lucky to go with Kaoru, who was enthusiastic and well-organized. We did some language exchange, so I learned some random words like 写し , うつし , utsushi, or reflection and 苔, こけ, koke, or moss. Furthermore, if I had been alone, it would have been nearly impossible for me to figure out how to get from place to place so efficiently.  It was a win-win for both of us, because she got to engage in English conversation for most of the day, which I hope was a special experience for her. Now we are better friends at school. Today she suggested that our next destination might be soba making!

Stay tuned for our next adventure!

*For my friends who aren’t  familiar with Japanese, I thought I’d put some words in both Kanji, Hiragana, and Romanji, so you can notice the different writing systems. It’s excruciating to learn but beautiful to see, don’t you think?