My one year anniversary of arriving to Japan has just passed, and I have a lot to be grateful for. I have a job, a car, a bike, an active social life, and a surprisingly big apartment, which I especially appreciate because it’s the first time I’ve a kitchen entirely my own. In the past few years, I’ve started to love cooking, and my interest in veganism is adding another layer to life here.

Here are some of my recent concoctions:

Green smoothie with walnuts and avocado. 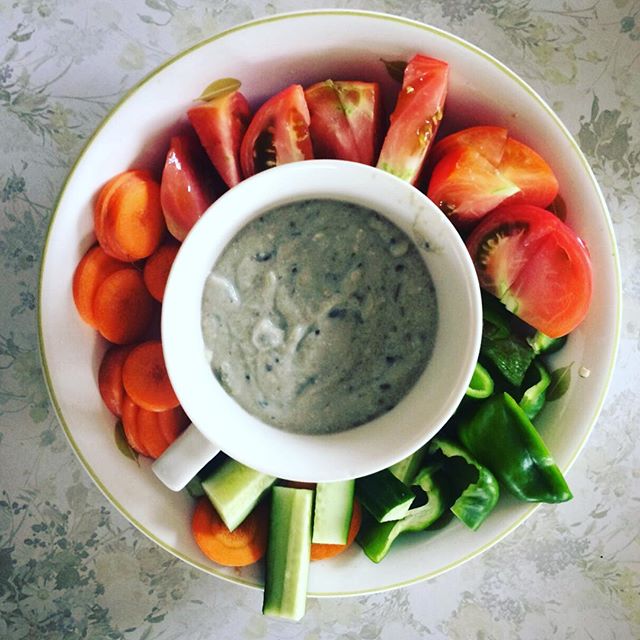 Eggplant tofu miso dip. I make it in my rice cooker and use a stick blender. Thanks dad!
Unlike vegetarians, who avoid eating animals, vegans avoid all animal products – no dairy, eggs, gelatin, honey, leather, etc. While I’d like to be fully vegan, I currently avoid meat and dairy, and only occasionally eat fish.

I love my way of life. I buy veggies from local farmers and fruits from the discount shelf at the grocery store. When I eat out, sometimes I have fish, but only for work parties or at restaurants where there is no other option.

I also bring my lunch to school every day, which I enjoy making and preparing. It’s like a present for myself. My Japanese coworkers, students and friends notice my abnormal eating habits, and often they ask me about it. Usually I just say, “Niku tabenai,” or “I don’t eat meat.” Sometimes they follow up with, “Why?” and I say something about “Dobutsu” and “Tomodachi.” (Animals and Friends.) If the person who asks me speaks English, I’ll say, “I don’t want to kill anything,” although my honest answer is a bit more complex.

I’ve been thinking a lot about this recently, because I worry that sometimes I offend people with my beliefs. I hope I haven’t lost any potential friends by sounding too harsh about my feelings. How can I say what I really feel without sounding judgmental?

The truth is, this is one of my most entrenched beliefs, and I am really passionate about it.  If anyone cares to know my deeper reasoning, here I’ll present a more multifaceted answer.

When I was in 7th grade, I did a research project on animal cruelty. During that project, I realized that every hamburger comes from an animal that is imprisoned and tortured before its death.  I  decided then that I didn’t want to be part of that cycle anymore. And recently my beliefs were further entrenched when I watched a documentary called ‘Cowspiracy’ that details the disturbing process of making meat.

Also, when I spent two and a half years traveling in New Zealand, Australia and South East Asia, I volunteered on about 10 farms. I made some close relationships with animals on these farms.

I lived on a small family farm near Invercargill, New Zealand for about 3 weeks. I learned how to milk a goat by hand, and it became one of my morning tasks.

I took this photo of my new friends on a dairy farm in Riverton, New Zealand, where I volunteered for two weeks. After training me and my friend, the owners left for a vacation, leaving us to run the farm without them. There were about 100 cows. We woke up at 5 AM for the morning milking, then had the rest of the day free until about 4 PM to repeat the process.  We fed the cows to distract them from the uncomfortable milking machines, and sometimes dodged pee and poop while trying to extract their milk. (After I realized how dirty and unethical the milking process is, I decided to stop drinking milk.)

I fed this baby cow whose name was Jack, who was later killed for veal (baby cow). 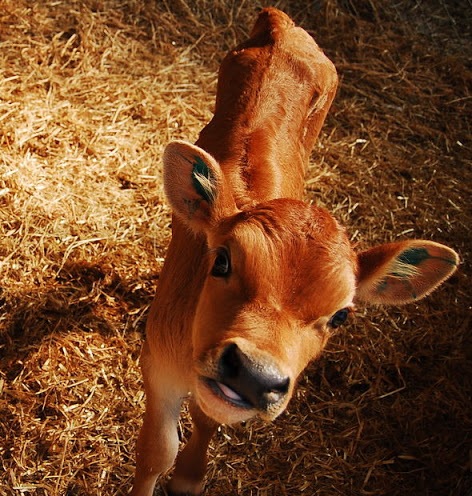 Jack had a distinct personality. When I first met him, he wouldn’t come near me. But his fear waned when he saw I was bringing him food. After a week, he became much friendlier.

Jack’s mother died when he was born, and they took her away in a truck. Jack, only a few hours old, chased the truck down the road!

Feeding the baby cows was a joy. Even though there were 8 places for drinking and 8 calves, they always shove and headbutt each other. 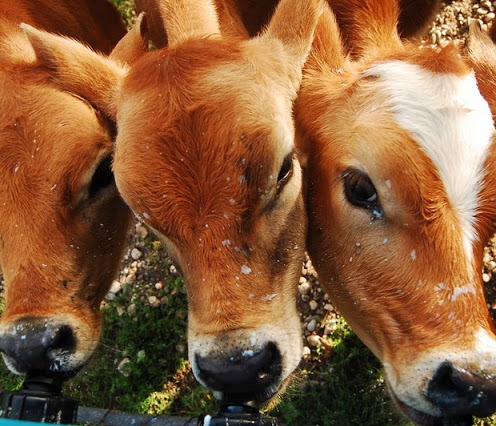 They are such sweet, innocent creatures.
Since I would never kill one of these animals myself, why should I eat animals that other people killed? I think if someone is going to eat meat, they should have to experience killing an animal themselves.

2. I feel better when I don’t eat meat

My ideas about food and wellness are profoundly influenced by my two month stay in the Philippines. I volunteered at Bahay Kalipay, a Yoga and Detox Retreat in Puerto Princesa on the island of Palawan. When I was there, we only ate raw food. I lost the weight I had gained from the street stalls in Thailand and Malaysia (where I had taken a brief hiatus from strict vegetarianism), and more importantly I felt a strong and spiritual connection with the food I was eating. The food, yoga, and daily routine was a gateway into a conscious way of living.  I felt like I had superpowers. 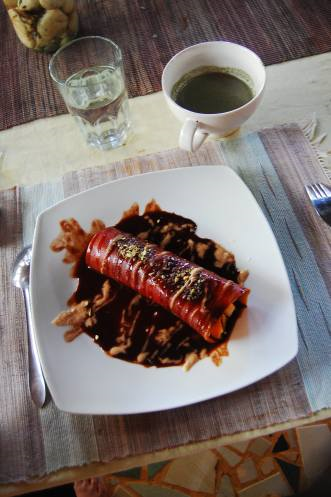 This fruit roll-up was a special breakfast! 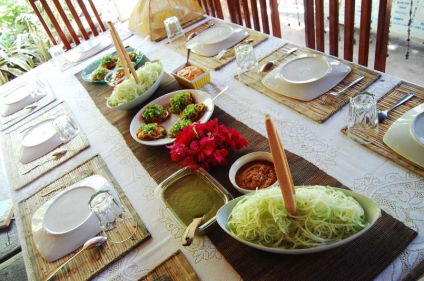 Meals were served family style. This was Italian night!

Pizza for dinner! The base was made with a dehydrator. 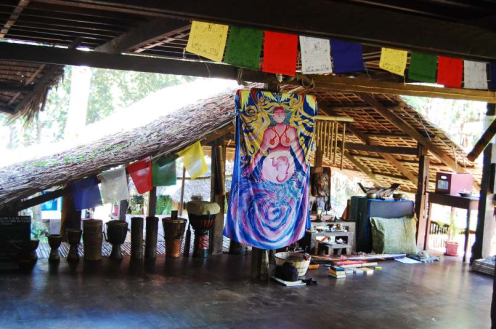 These salads were the bomb!!!
The day began at 6am, where we would drink a big glass of lemon water to alkalize our bodies, and then do oil pulling for 20 minutes. (Oil pulling is swishing coconut oil in your mouth, and draws out toxins from your mouth.) Next, we would take a yoga class, drink more water, and then eat breakfast at about 8. A few hours later, a gong would ring, and we would gather again for green smoothies.

In the Philippines, this morning routine was crucial. Now, in Japan, I try to exercise every morning before work (and sometimes after, too) and I have a green smoothie for breakfast almost every day.

At my last job at the Santa Barbara City College Writing Center, one of my students asked for feedback about her paper on a book called The Blue Zones. After I helped her, I was inspired to read the book. The Blue Zones are 5 places in the world where people live to be over 100 – Okinawa, Japan; Ikaria, Greece; Sardinia, Italy; Nicoya, Costa Rica; and Loma Linda, California.  Author Dan Buettner visited these places and interviewed their elderly, examined their lifestyles, and found what they had in common. The healthiest people in all these countries have a strong social community, an active lifestyle, and a 95% plant based diet.

Except for the 7 day adventists in Loma Linda, California, these centenarians aren’t entirely vegetarian. Most of the Blue Zone countries eat small amounts of meat and fish. Low-impact exercise is an inherent part of their lives, not some chore they must accomplish every day. For example, the Grecian were pastors, hiking up and down mountains daily. The Japanese are outside working in their vegetable gardens even in their 90’s. (I see them in my town!)

After reading this book, I have been trying to incorporate some of their wisdom into my own daily routine. For example, I try to exercise almost every day (although I prefer sports like ultimate frisbee and soccer to low-impact exercise) and eat 95% plants. I stopped drinking milk and eating dairy after my experience on the dairy farm (with an occasional green tea ice cream as an exception… I’m not perfect!)

Here are some photos of the food I’ve enjoyed in the past year.

I learned how to make triangular onigiri (rice balls!) This has seaweed inside

Yummy vegetarian bowl with dad (with egg and avocado on top)

A beautiful meal that I enjoyed at a friends house… not vegan but with lots of vegan options, and only including seafood.

Salad with cucumber, pickled miso garlic, and a bean and rice concoction. 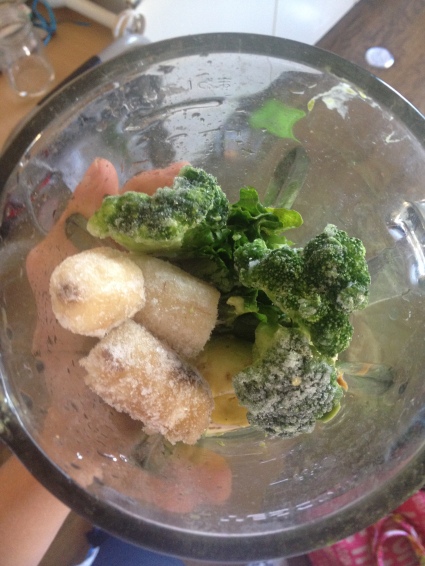 Green smoothie ingredients: frozen banana, frozen broccolio, half an avocado, big handful of spinach (or any leafy green) and a big chunk of ginger. Plus water! I converted my sister, now she eats them!

I went hiking with my friend David and we stopped at a farm along the way, and the farmer gave us free gnashi! 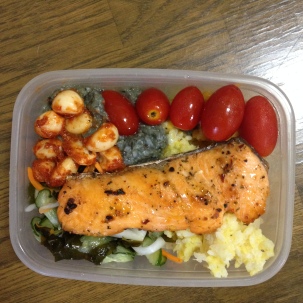 I used to make fish for lunch but I stopped. Poor fishies. 😥 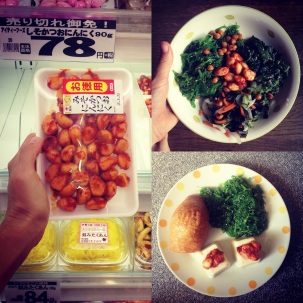 I’m obsessed with this miso r

My egg and avocado bowl.

I’m not a legitimate vegan because I still eat ice cream occasionally. 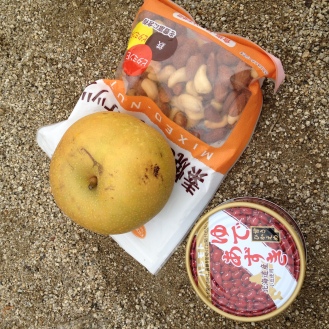 Our lunch at the top of the mountain. Unfortunately the can of beans had sugar in it.

Mossburger (a Japanese burger chain) has a vegan option! Rice bun with grilled veggies on the inside, plus a salad and ice tea. I think it was about 600 yen 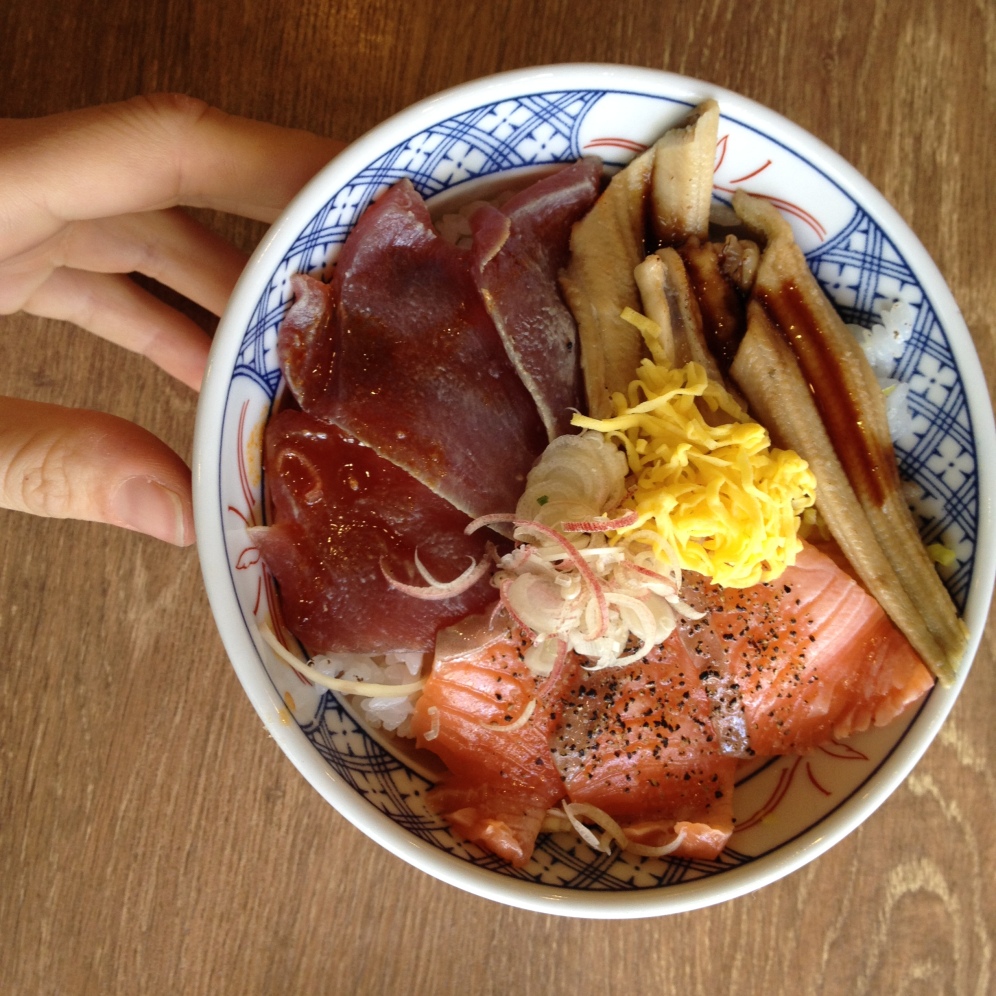 Dad’s sashimi bowl in Tokyo
3. I want to have a small footprint

According to PETA: the Union of Concerned Scientists lists meat-eating as the second-biggest environmental hazard facing the Earth. (Number one is fossil-fuel vehicles.)

In the third-year textbook at my school, there is a section about deforestation of the Amazon Rain Forest. I researched the issue and made an interactive presentation for students. One question I asked them was, ‘Why do you think the forest is being destroyed?’ Their answers were varied, from ‘building a new mall’ to ‘making paper,’ but I found that the leading cause of deforestation is meat production. According to a report from the Food and Agriculture Organization of the United Nations, 80 percent of the deforestation in the Amazon have been covered by pastures for raising cattle.

There are people in many countries who don’t have enough food to eat. Many vegans and vegetarians argue that we should reallocate the food we are feeding animals and give it to the hungry people all over the world.

It takes so much water and land to raise animals that it’s shocking to me that the world is still relying on meat. See the following infograph from PETA for more details.

My views on veganism are multifaceted, and obviously I’m not perfect since I still eat fish and the occasional ice cream. For now, I’ll have to settle for almost vegan. Someone actually just wrote a book called The Book of Veganish (although I haven’t read it yet!)

Even if it’s not happening exactly where I live, I’m glad some parts of the world are starting to wake up to the issue of animal rights. I’m not completely alone; veganism is gaining popularity in the US and Britain ! However, there is one great restaurant about an hour drive from my apartment called Fukamidori that is completely vegan and with a menu that changes weekly. Who wants to go there with me?

Thanks for reading! Any opinions or questions are welcome. Please leave a comment!